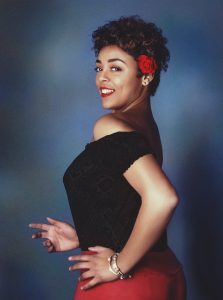 “I’ve often been told I share the late Dorothy Dandridge’s resemblance. I hope to become even half as much of an influence as she was. A trail blazer for black actresses and singers in Hollywood — her shoes are definitely going to be hard to fill, but I always like a good challenge. It is an honor to be compared to someone like her.” – Destynee Raines

Dorothy Dandridge was the first African American actress to be nominated for the Academy Award for Best Actress and to receive, and also an Oscar nomination. She began her career as a nightclub singer in the 1930’s and appeared in a few small acting roles in the late 30’s, early 40’s. Finding leading roles as a black woman in the 40’s and 50’s was incredibly difficult, but she landed her first starring role as a school teacher in the film Bright Road in 1953 and then the title role in the film Carmen Jones in 1954 which earned her the Oscar nomination. She stood up for herself and equal rights by refusing roles that didn’t offer equality and despite her success in Carmen Jones, she struggled to find roles worthy of her talent. One of her most important roles came in 1959 as Bess in the Academy Award winning, Porgy and Bess. Setting the stage for future black actors and actresses, Dorothy Dandridge is a celebrated trailblazer for American cinema. 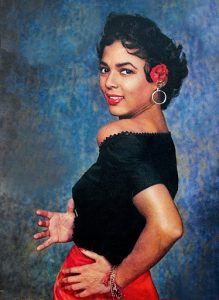 (source image from the cover of LIFE Magazine 1954)